The prediction of rainfall is a critical issue in several African countries. The scarcity of in-situ measurements (for example from ground-based radars) of water vapor content in the lower troposphere prevents Numerical Weather Prediction Models (NWPM) to reach high accuracy in weather forecasts.

In order to compensate for the lack of in-situ measurements, satellite images can be used. These images are provided by the radar sensor on board of the European Space Agency (ESA) satellites Sentinel 1. The two twin satellites are able to image the entire planet with unprecedent frequency: the revisit frequency, taking into account both ascending and descending geometries and both satellites, is up to 3 days!

Why radar images? A normal optical system for earth observation works in the exact same way of the camera in your phone: the sun shines on earth and the light is reflected by objects on the surface. The sensor captures this light and the image is formed. Radars work in a similar way; however, the light is not provided by the sun, but from the radar itself! An electromagnetic wave is launched by the radar towards Earth, it reflects on the surface and the echo is captured. By analyzing the echo and, in particular, the time required by the wave to travel the path from the satellite to ground and back, it’s possible to retrieve information about the water vapor content of the atmosphere.

In the past months, TWIGA researchers worked to design and implement an effective and robust method to extract useful information from these echoes. The first results from tests in Togo are very promising!

TWIGA researchers carefully developed a new technique that is able to rapidly and simply extract the needed parameters useful for the so-called ingestion into NWPM without the need for a complicated or time-consuming procedure. 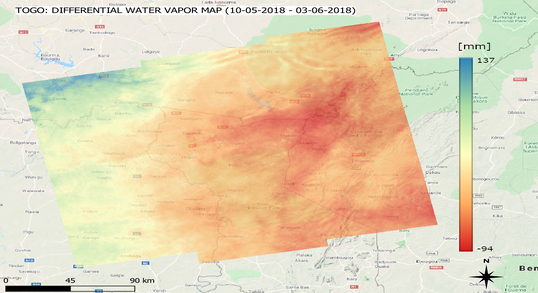