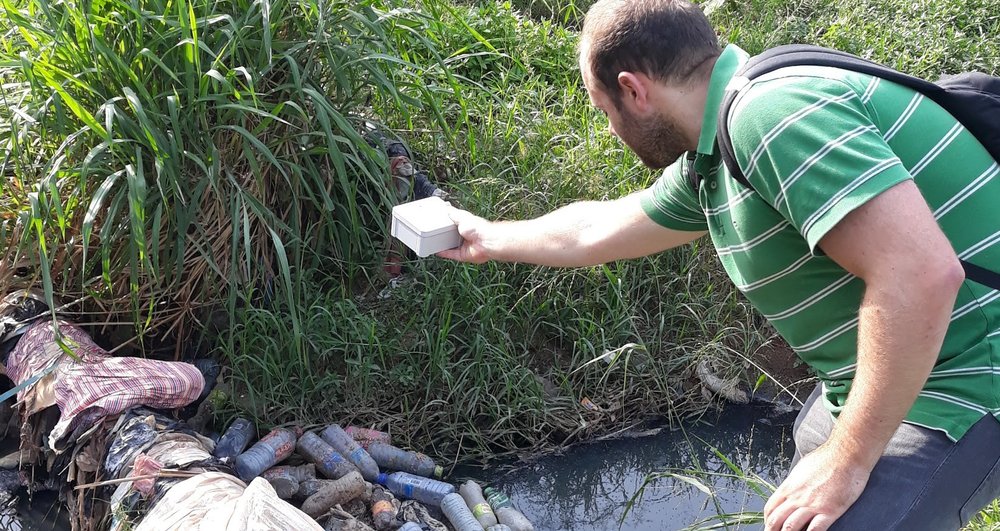 From “nice idea” to “actionable information"

An important output of the TWIGA project will be new geo-services (twenty!) based on the application of innovative sensors. In order to speed up the development of these services, a Hackathon was organized from 19 through 23 November 2018 at the Kwame Nkrumah University of Science and Technology in Kumasi Ghana. The objective was to build complete value chains, from observation to internet storage to service delivery. We aimed high on purpose to see what can and cannot be done in such a short time. The results are very promising!

Resources used to develop the sensors

The Hackathon was hosted by the KNUST Business Incubator in their new building on campus. Key resources were provided by the OPEnS lab of Oregon State University. OPEnS Director, Dr. Chet Udell, led the workshop and brought a lot of key hardware resources along, including a LoRa hub and six LOOM kits. LOOM is the system used at OPEnS and works like a plug-n-play system for sensors. LOOM is based on the Feather microprocessor of Adafruit and takes a broad set of sensors, which can be analog or I2C. There is predefined software that ensures the right data are collected and sent onwards through WiFi or LoRa. LoRa stands for Longe-Range (5km) Radio and takes very little energy, which makes it very interesting for environmental applications. The OPEnS LoRa hub would receive the data from simple LoRa nodes and pass on the information to the internet, for example to a Google Sheet, from where it could be used for further applications. All groups managed to quickly set up the information chain from the sensor to the LoRa node and Google Sheet.

Five teams participated, four from Ghana and one from Nigeria (Federal University of Technology, Akure, FUTA). In addition, there were TWIGA participants from South Africa (SAWS) and the Netherlands (TU Delft) who were not competing. Each team had a specific idea with which to serve the public.

The first team developed an agricultural information service concerning irrigation based on several sensors, including a soil moisture sensor. The service would include advice concerning the best planting dates and, especially, when irrigation is needed. A similar sensor set-up was used by the second team, but now for application in greenhouses, which included the active use of LED's and monitoring of incoming radiation. The third team monitored water quality with an eye on aquaculture (temperature, pH, …).

All the participants with their innovations!

The fourth team already had a concept that was developed further and concerned naturally cooled storage, using evaporative cooling. So depending on temperature and relative humidity, a water pump, and a fan would be activated to keep the temperature as low as possible. The complete set-up was solar powered. The FUTA team had a broad set of sensors, most of which they had developed themselves, to monitor rainfall and water depth for early flood warnings.

Joel Botai of the South African Weather Service (SAWS) was especially interested in air pollution through particles. An interesting sensor was used, namely a $10 particle sensor by Omron (B5W-LD0101-1) that counted particles larger than 0.5 and larger than 2.5 micrometer. This sensor was new for the LOOM system. The TU Delft team tried to use an inexpensive spectrometer to detect plastic floating in drains. The difference between open water and plastic was very clear for given lighting circumstances.

It all worked out!

All designs were working in the end and were evaluated on commercial potential by students from the Center for Frugal Innovation in Africa. Thanks to the Delft Global Initiative different prizes were awarded to the teams to help them with the first steps beyond the proofs of concept that were produced during the Hackathon.