Narok County of Kenya set to be a global role model in improved real-time weather observations and climate information dissemination and use (Part One).

The TWIGA project in Kenya is championed by the Kenya Meteorological Department comprising a multidisciplinary team of 5 members with the recent addition of a new member who will be pursuing a Ph.D. course within the project. The TWIGA project has started in Narok County in Kenya, located about 145 km from Nairobi, the capital city. The TWIGA services will be extended to other Counties with time. The Narok County situated in southwest Kenya hosts one of the most popular Wildlife Reserves in Africa. A mention of the Maasai Mara will not sound strange to anyone wishing to visit Kenya. It is known for its great wildlife diversity and species and hosting of one of the 7 wonders of the world living alongside the globally known Maasai community. The famous wildebeest migration happens here every year when the wildebeest move from the Serengeti National Park in neighboring Tanzania into Kenya by crossing the crocodile-infested Mara River.  This great migration is normally triggered by the change in weather patterns particularly harsh drought conditions which force the animals to migrate in search of pasture across the river.

The road that leads to Narok from the Capital city- Nairobi is uneventful until one reaches the Great Rift Valley viewpoint which is at an altitude of about 18,000 meters above the mean sea level. With an eyeful of the Great Rift Valley, the tarmac road descends gradually along the stretchy Mai Mahiu road popular with trucks. Before one arrives in Narok town, there are several small trading centers from where one cannot miss out the generosity of Kenyan people—a welcoming smile. One thing that strikes you as one snakes his way towards Narok County which is in southwestern Kenya, is the presence of livestock (goats, sheep, cattle) signifying the symbol of the wealth of the Maasai people who are the majority inhabitants of Narok. One cannot also lose sight of large areas with farms noticeable from the road. A number of farmers in Narok do large scale wheat farming among other crops.

participants of the stakeholder workshop in Narok

The TWIGA team participated in the first roadshow activities and workshops in Kenya which were aimed at carrying out a feasibility and market analysis of farmers and other key stakeholders to gauge the potential to introduce disdro-evaporometer which are to be used to provide reliable real-time rainfall observations and evaporation measurements for a number of sites within the Narok County. This market research took place in August 2018 and involved 5 Counties and several academic and research institutions. A validation workshop of the findings was held in Nairobi whereby the Narok County wore the prize to host the TWIGA testbed experiment against 8 other Counties. This was supported by the Swedish Agency for Economic and Regional Growth.

The TWIGA team’s first stakeholders’ workshop in Narok took place from 26th February 2019 to 2nd March 2019 in Narok town. The objective of the stakeholders’ workshop was to get first-hand information about the user needs and requirements and how the installation of disdro-evaporometers would benefit the farmers in response to climate risks, urban flash flood/other flood management and related issues. The stakeholders from Narok who included farmers and pastoralists indicated that they welcome the idea of real-time observations and installation of the sensors in their farms if they were to get more reliable climate information.  Ideally, it was suggested that farmers can play an important role as champions of data productions in their areas. This was seen as a step towards providing relevant weather information to the user.

The evening after the stakeholder's workshop was eventful as one of the farmers Mr. Ben Suyianka invited the TWIGA team on his farm for a wood fire discussion. This is in line with Maasai culture of generosity where important visitors are welcomed with food. To capture ideas from the participants, the workshop used flip charts where for example, sectors of interest to the stakeholders in Narok were identified as; Farmers (commercial and non-commercial), Insurance companies, Energy, Transport, Construction, and Industries. These were later used in the development of business models for the various sectors and value chains using more localized weather information. 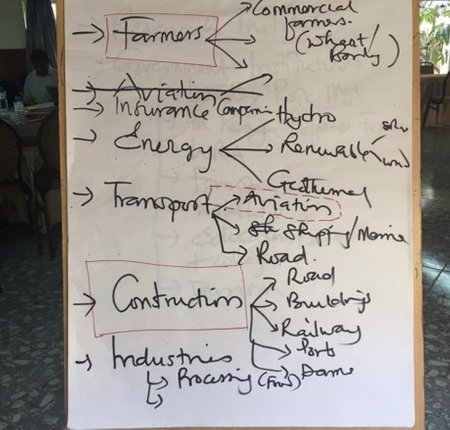 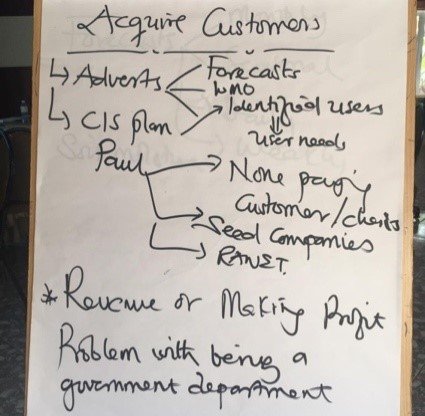 From the farmer’s perspective, wheat, barley, and pasture were some of the major crops produced in the area which would greatly benefit from the new TWIGA services. The issue of urban flash floods was also identified as a key issue that affected Narok causing damage to infrastructure and property. Flooding from heavy precipitation that affects farming activities was another major concern for the stakeholders. Due to climate variability and erratic weather patterns, the farmers were also keen on crop insurance, arguing that if it helps them limit farm losses, they would be more than willing to support the data collection process and climate information development. Stakeholders from the County government supported the new plans that will enable better management of disasters such as floods, better transport, and energy decisions among others.

Some of the takeaways during the workshop were: