How TWIGA will improve heavy rain forecast in Africa

The prediction of heavy rainfall is a critical issue in several countries. In Africa, the scarcity of data to support such predictions makes it fundamental to improve the monitoring of atmospheric parameters. TWIGA researchers will set up a system that exploits satellite images and in-situ measurements to derive useful data for meteorological agencies to improve the prediction of heavy rain. The images will be captured by radar sensors on board of the European Space Agency (ESA) Sentinel Satellites.

The in-situ measurements will be derived from low-cost GPS (Global Positioning System) instruments, the same embedded in our smartphones, currently mainly used for navigation purposes.

The higher the water vapor content, the more the velocity is reduced. High values and rapid variations of water vapor are often precursor of heavy rain phenomena.

By properly using a GPS instrument, kept in a fixed known position, it is possible to continuously derive the water vapor content in the atmosphere above the GPS antenna.

TWIGA researchers are working on the algorithms/software allowing for an accurate determination of atmospheric water vapor from the analysis of the reduced speed of electromagnetic waves used by SAR and GPS sensors. These water vapor data will then be provided to weather forecast experts, to be used within their models, with the final goal

of improving the predictions of heavy rain.

They are currently selecting the sites where the low-cost GPS sensors will be installed in the next months. The city of Kampala in Uganda is the first selected test site. 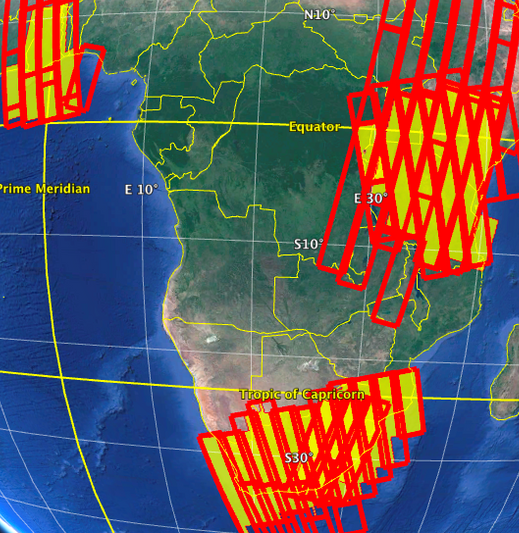 Sentinel 1A and 1B coverage in the TWIGA test areas